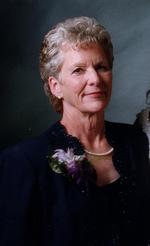 Phyllis A. Diemart, 84, a resident of Eagle Harbor passed away on Sunday August 16, 2020 at MissionPoint of Hancock.
She was born on January 29, 1936 in Towanda, Kansas to Donald and Ellen (Kidwell) Diemart. She attended the local schools. After high school she went on to receive her Masters Degree in Education.
She opened up the first Education Department at Muscatine General Hospital in Muscatine Iowa where she had worked as an Operating Room Nurse and Supervisor, Med-Surg nurse, ICU Nurse, and then she went on to be an educator. In 1957 she married Dalbert “Dale” Knox, they later divorced in 1987. She then married John Diemart in 1991. She worked for Hawk NDT Designs as office manager and accountant. In this role she traveled the world with John.
She was an outstanding gardener! She could plant anything!! She later became the jam lady in Eagle Harbor.
She is preceded in death by her parents, her sister, Julia “Judy” Duncan, her step-daughter Lorie, and her husband, John Diemart.
She is survived by:
her daughters: Doreen and Lorraine
her son: Lance
Her step-daughters: Doreen, Cherie, and Kristy
Her sister: Janet Diemart
A memorial service will be held in the spring/summer of 2021.
Online condolences for the family may be left at www.ericksoncrowleypeterson.com
The Erickson Crowley Peterson Funeral Home in Calumet is assisting the family with the arrangements.