To share your memory on the wall of Henry \"Hank\" Ilenich, sign in using one of the following options:

Col. Henry “Hank” Peter Ilenich, a resident of Florida Street in Laurium passed away peacefully at his home with his wife by his side on Friday morning August 7, 2020.

Col. Henry “Hank” Peter Ilenich, a resident of Florida Street in Laurium passed away peacefully at his home with his wife by his side on Friday morning August 7, 2020.

He was born July 26, 1933 at the Calumet Public Hospital to John and Katherine (Kastelic) Ilenich. He was the first incubator baby.

Henry attended local schools including classes in a 2 room log cabin at Betsy River for 3 years where his mother was the teacher.
In high school Henry was a drum major for the band. He joined the National Guard in his senior year and graduated from Calumet High School in 1951.

After graduation Henry spent 2 years on boats where he became a wheeles man. He then volunteer/draft as a sergeant U. S. Army in 1954 and served in Korea at Pan Mun Jom for 2 years , this was the site of the peace talks.

Henry then went on to graduate from Northern Michigan University in 1958 with a degree in History which brought him back to Calumet as a teacher at Calumet High school for the next 36 years.

On June 24, 1961 he was united in marriage to the former Mary Richetta at the Sacred Heart Church in Calumet.

In 1967 Henry began serving as the Company Commander for the local National Guard 107th Engineers and was deployed during the Detroit Riots in 1968 for the Martin Luther King assasination and more until his retirement from the Michigan National Guard as a Full Col. in 1988.

Hank enjoyed spending Time at his camp in Big Traverse and woodworking in the shop. If he had any downtime you could find him with a sudoku book in his hands.

Preceding him in death were his parents, brother John Ilenich and sister Mary Hrovatich.

Surviving are his wife Mary.

The family would like to thank Aspirus at Home Hospice Staff for their assistance in making this transition a peaceful one.

Burial with military honors conducted by the Copper Country Veterans Association will be in the Lake View Cemetery.
Read Less

To send flowers to the family or plant a tree in memory of Henry "Hank" Peter Ilenich, please visit our Heartfelt Sympathies Store.

We encourage you to share your most beloved memories of Henry "Hank" here, so that the family and other loved ones can always see it. You can upload cherished photographs, or share your favorite stories, and can even comment on those shared by others.

3 trees were planted in the memory of Henry "Hank" Ilenich

Posted Aug 14, 2020 at 01:30am
Hank was my father's childhood friend . The last time I took my father up to the U.P. will be a memory that I hold dear the rest of my life. On one of the days we saw Hank, I had the privilege to play chauffeur while Hank and my father (Tom Kaifesh) sat in the back seat instructing me what streets to go down. We took a tour of the area so they could reminisce about their childhood. I sat silent in the driver's seat just waiting for one of them to say "turn here" or "stop here for a minute". As we drove, I could not have enjoyed more listening to their conversations.
Hank: " Aww Tommy, remember when we were over here and "...
Tom: "Oh yeah, hehehehhe"
Hank: "Can't believe we didn't get in trouble for that"
or my dad would point off into a field and ask Hank
Tom: "Remember when we came down here, hehehe"
Hank: "oooh yeah, hahaha"

The whole time they never really spoke a full sentence to each other as we drove down memory lane. They just laughed as they pointed. So many times one of them would say "I can't believe we didn't get into trouble for THAT". Hank would say how my dad's grandma was mad about something they'd done. They did a lot of things that got them into trouble.

When we got out of the car to go look at something, I walked slowly behind them so I could just watch, watch the love that I could so very clearly see they had for each other. They would reach out to each other to grab a hand or elbow to assist each other up a hill or help the other keep their balance. It made me teary eyed when I witnessed these wonderful actions between them and makes me cry now thinking about the two of them. My dad was not one to grab anyone's hand for assistance but he took Hank's without hesitation. My dad really valued Hank.
When that last day visiting with Hank came to an end, I stood next to them in the driveway and watched and listened as they told each other what their friendship meant over the years and that they loved each other. They said they would most likely never see each other again since they were both having medical issues. They hugged and said "Goodbye". I have never been witness to something like this and it touched my heart more than I can explain.
In September of 2018 I had to make the difficult call to Hank and let him know his friend passed away. I can still hear Hank's voice as he acknowledged and asked what happened. Outside of immediate family members, hearing of Hank's passing has touched me more than anyone else's. Maybe knowing that Hank and Tommy are together again, this time with no pains, no health issues, no problems...just the ability to laugh and get into trouble again brings me some comfort. Who knows all the mischief they got into together when they were young, hopefully whatever mischief they get into now doesn't get them kicked out.
My mother Barbara and I send so much love to Mary and the rest of the Ilenich family. You have our deepest sympathy.
Comment Share
Share via:
DG

Posted Aug 13, 2020 at 03:24pm
Unfortunately I cannot attend today. Hank was a great mentor to me in my early days of teaching at C.H.S., along with his other experienced friends and staff members. He was also very helpful to me as a rookie home owner, with his passion for construction and remodeling. Great memories and so much fun with the steak fries at his camp. I also continued to enjoy him in retirement , with the Burger King coffee crew. He had a long and full life, but will be missed. His unique sense of humor was often very entertaining. Rest well my friend. you have earned it. Dan Glinn
Comment Share
Share via:
GJ

Posted Aug 11, 2020 at 10:31am
Dear Illenich family,
I was sad to hear of the passing of the Colonel. He was my teacher, a commander in the unit I served in, a person I admired, and a worker for me on a few projects when he was retired. I loved his attitude about how to get things done and I appreciated his easy going style when he talked with me or we worked together so many years ago. I have many fond memories of Hank. Mary, Michael, and Karen, and all the grandchildren, Hank was a wonderful man and you have my deepest sympathies during this sad time.
Comment Share
Share via:
MC

Posted Aug 11, 2020 at 08:26am
To a great neighbor and friend at Big Traverse Bay you will be missed! Are deepest sympathy. Steve and Millie Clough 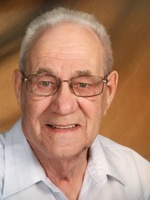