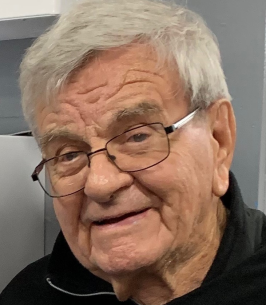 Harry D. Bennetts, 92, peacefully passed away at home on Wednesday, January 12, 2022, surrounded by his family. He was born on July 4, 1929 and lived in Calumet his entire life. Harry married Marcia Rapson on October 10, 1953 and they were married for 67 years.

Harry had a passion for music and the trumpet. He learned to play at a young age and participated in youth, community and dance bands. He continued to play the trumpet into his 90s.

Harry graduated from Calumet High School in 1947 and Michigan College of Mining and Technology (Michigan Tech) in 1951 with a BS in Civil Engineering. Harry was in ROTC through all of high school and college. He was a 1st Lieutenant in the Army in Korea from 1951 to 1953, where he commanded Engineering Co. 526.

Harry worked for C&H Mining after returning from Korea. When C&H sold the water & sewer services, he was selected to run the Northern Michigan Water Company (now Michigan American Water Company). He retired from there after 38 years of service.

Harry was the Treasurer of the CLK Hockey Association for over 10 years. He was active in the Rotary Club, the American Legion Post 61, Kernewek, the Blue Line Club at Michigan Tech and was a long time member of the Calumet United Methodist Church where he participated on the Board and sang in the Choir.

A special thanks for the wonderful care to the staff of At Home Companions and UPHS Hospice Care.

Burial will take place in the spring in Lake View Cemetery.

Online condolences for the family may be left at www.ericksoncrowleypeterson.com
The Erickson Crowley Peterson Funeral Home in Calumet is assisting the family with the arrangements.