To share your memory on the wall of Donald Kilpela, sign in using one of the following options:

COPPER HARBOR - Captain Donald Robert Kilpela, of Copper Harbor, MI, died on October 15, 2020 at the age of 66 at Marquette General Hospital from the complications of a stroke. Donny was born October 21, 1953 in Coronado, CA, and grew up in Detroit. He graduated from Bentley High School, in Livonia, where he later attended Schoolcraft Community College. After moving to the Upper Peninsula he attended Michigan Tech University.
Donny was a natural athlete who excelled in many sports. He was a varsity tennis player in high school, and his bullet-like Frisbee throw called a "thumber" made him an All-American Guts Frisbee player in 1973. He was an exceptional golfer specializing in deadly putting and getting out of the woods of the Keweenaw Mountain Golf Course. For 25 years he ran the Black Fly Golf Open during the most virulent black flies in late May each year.
Capt. Don began his career as a 17 year old deckhand on the passenger ferry Isle Royale Queen II in 1971 when his parents bought the ferry service from Copper Harbor to Isle Royale National Park. In 1975, he became a U.S. Merchant Marine Officer and served as a captain and partner in his parents' firm until his death. He sailed the open waters of Lake Superior in all 49 seasons that the Isle Royale Ferry Service operated. Though he was a fun-loving eccentric, Capt. Don was a skilled and courageous mariner. He safely brought tens of thousands of people to and from Isle Royale during his years of service on the greatest and most dangerous of the Great Lakes. He faced some of the most challenging conditions Lake Superior can present to the mariner. It is a great sadness that Capt. Don never retired to receive his deserved recognition as one of Lake Superior's greatest passenger ferry skippers.
During his off-seasons, Donny discovered his talent for and creativity in drawing and painting. He published a daily cartoon strip about his witty gang of ecologically-minded friends, the Earthlinks. He then started painting abstracts that have attracted wide admiration. He was also widely known across the Copper Country as a humorous storyteller, an enthusiastic promoter of Copper Harbor and Isle Royale, and later a passionate thimbleberry picker. In December, with Copper Harbor’s exceptional snows, Donny launched and worked tirelessly on Copper Harbor's annual tradition of a large display of Christmas lights across the village's community park.
Donny was single throughout his life. He is survived by his parents, Captain Donald and Elizabeth Kilpela of Copper Harbor, brothers Captain Ben (Marsha) of Mason and Copper Harbor, Captain John (Karma) of Calumet, sisters Susanne of Hancock, Jocelyn of Arvada, CO), and Lisa (Cormac) Ronan of Arvada, CO, his dear aunt Helen Wisuri of Livonia, uncles James Kilpela of Wareham. MA and Stefan Szyszkowski of Golden, CO, numerous beloved cousins, nieces, nephews, and his best friend and longtime companion Tammy Jo Cloutier of Copper Harbor.
Donny was also survived by the tens of Copper Harbor residents who loved him, fought with him, worked with him, and were in turn loved by him because it was where he just wanted to be.
If friends will wear a mask and try to keep some space, Betty and Don and their children would love to have you commiserate with them at an evening coffee social on Tuesday, October 27 at any time from 4 until 9 pm in the Siskiwit Reception Hall on Pine Street in Calumet.
There will be a memoriam in Copper Harbor in the summer of 2021.
Donations in Donny's memory may be made to the Copper Harbor Improvement Association to fund the Christmas Lights.
Online condolences for the family may be left at www.ericksoncrowleypeterson.com
The Erickson Crowley Peterson Funeral Home in Calumet is assisting the family with the arrangements.
Read Less

To send flowers to the family or plant a tree in memory of Donald R. Kilpela, please visit our Heartfelt Sympathies Store.

There are no events scheduled. You can still show your support by sending flowers directly to the family, or planting a memorial tree in memory of Donald R. Kilpela.
Visit the Heartfelt Sympathies Store

We encourage you to share your most beloved memories of Donald here, so that the family and other loved ones can always see it. You can upload cherished photographs, or share your favorite stories, and can even comment on those shared by others.

Kim and JoAnn Alexander and family sent flowers to the family of Donald R. Kilpela.
Show you care by sending flowers

Posted Jan 08, 2021 at 12:46am
Very Sorry to here of Don's passing. Went to school with him at James Monroe and was in my 6th grade class at Hayes. Always, friendly and polite. Was up in Houghton in 1982 and he pulled over in his car. Could not believe I was talking to him. Very successful man. WILL keep him in my prayers Bev and Tom Carlson
Comment Share
Share via:
CT

Posted Nov 01, 2020 at 03:32pm
Don Kilpela was a larger than life individual who I first heard of - being referred to as "the mayor of Copper Harbor". I and my family greatly appreciated the efforts that Don put into the July 4th activities in CH. On a few occasions I was fortunate to share a barstool next to Don at the KML where he opened up and spoke to me as a friend. Thereafter I always looked forward to crossing paths with him, however infrequent.

Copper Harbor will never be the same now that he is gone, but of course his memory will live on for anyone who had a chance to know him. I would love to see a permanent memorial installed in his honor somewhere in CH.

My condolences to the Kilpela Family.

Posted Oct 29, 2020 at 07:40pm
I was stunned to just see this. I often think of Donnie and hanging out with him on a weekend off when I was at Isle Royale. He “showed me the town” at Copper Harbor! LOL. I enjoyed reading his comic strip and was honored that he asked my opinion on some as yet unpublished ones. He was all smiles and full of laughter. My heart goes out to the family. Fair winds and following seas, Donnie!

Posted Oct 27, 2020 at 04:04pm
From Gail and Phil, and our family, we wish you peace. Thinking of Donny makes us smile, so many stories, so many great memories.

Kim and JoAnn Alexander and family

Posted Oct 26, 2020 at 02:49pm
Don and Betty and family, Our sincere condolences on the passing of Don Jr. We are thinking of all of you a lot during this sad time.

Kim and JoAnn Alexander and family purchased flowers for the family of Donald Kilpela. Send Flowers 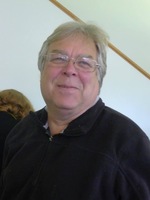 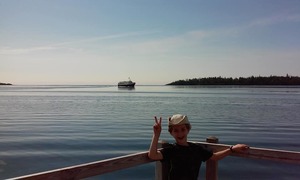 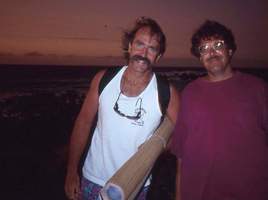