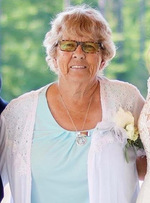 Carol Johnson, 83, a resident of Calumet passed away on Wednesday September 30, 2020 at Aspirus Keweenaw Hospital in Laurium.

She graduated from Calumet High School with the Class of 1955.

She worked at Bell Memorial Phone Company in Illinois for a brief time before moving to the Copper Country in 1970 where she also briefly worked at Calumet Home for the Aged but her passion was being a mother and raising her 8 children. She was a wonderful mother, grandmother, and great grandmother who had a zest for life. She was passionate about biking, exercise, and being outside, and never missed a sauna/swim every summer in the big lake! She was a friend to many and was a good listener but you also knew exactly what was on her mind, but most importantly she was never afraid to confess her Christian faith and was always a reminder to how important our faith is and to keep it most near and dear to our hearts

She was a member of the First Apostolic Lutheran Church of Calumet.
She is preceded in death by her two sons Thomas and Hans and her great granddaughter Ina Anderson, her brother Donald Aho, Sisters Margaret Krans and Barbara Kastamo.

Left behind to mourn her passing special sisters-in-law, Jane Johnson and Delores Johnson. Along with numerous nieces, nephews, and countless friends in the community and beyond. Carol was a friend to all who met her. She was an avid Copper King hockey, basketball, volleyball, and football fan. Especially if one of her grandchildren were participating.

A private memorial service will be held next week at the Siskiwit Reception Hall.

There will be a public memorial/burial service in the spring for Dan and Carol.
The Erickson Crowley Peterson Funeral Home in Calumet is assisting the family with the arrangements.

Online condolences can be left for the family at www.ericksoncrowleypeterson.com