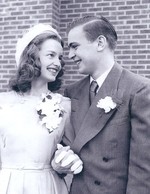 Robert “Bob” Ross Harter, 91, a resident of 8th Street in Calumet passed away on Christmas Day at Aspirus Keweenaw Hospital in Laurium following a short illness.
He was born on January 27, 1929 in Calumet a son of the late Hyacinth (Babe) and Flora Harter.
Bob graduated from Sacred Heart High School.
On June 25, 1949 he married the former Elizabeth “Bette” Tarvis in St. Johns Church in Calumet and she preceded him in death on June 16, 2015

His early career was working for his father at Harter’s Party Store and the Village of Calumet. He then went on to work for the Calumet and Hecla Mining Company. After that he spent a few years working for Clairmont Trucking in Escanaba. Then he left the Copper Country for a short time to work in Oklahoma for Transcon Trucking. He returned to Calumet to take over the Pontiac dealership (Harter Pontiac Buick) which he ran for 33 years.

In his younger years when his vision was good he enjoyed stream fishing, rabbit hunting and deer hunting. A lot of his time was spent raising a family, time at the Armory coaching or watching hockey. He was one of a number of people responsible for bringing artificial ice to the area which benefited the community. Later on he helped to bring in a semi-professional hockey team to the area called the Copper Country Chiefs.

Over the years he met a lot of people. He was always curious to find out where a person was from and who they were related to. Those who met him knew what a character he was. He always had a story to tell! He loved all his grandchildren and great-grandchildren and gave them all fun nicknames that they carry with them to this day. He is probably catching up with some of his old friends that he has missed over the years, including, Ken Rowe, Walt Kilberg, Jim O’Toole, Ed Coppo, Ed Jackovich, Ken Korri Jack Rierdon and many more. But most importantly catching up with his wife Bette Ann. He is probably thrilled to have her waiting on him again!

He was a member of St. Paul the Apostle Church in Calumet.
Preceding him in death was his wife Bette, Daughter in law Sharon Harter, Grandson Dan Harter, sisters Betty Sotlich and Rita Strand

A private family service will be held.

Burial will be in the Waasa Cemetery.

In lieu of other expressions of sympathy memorials may be given in Bob’s name to: St. Paul the Apostle Church P.O. 546 Calumet, MI 49913 or Calumet Hockey Association, PO Box 385 Calumet, MI 49913