In Memory of
Sigrid Neva Fredrika "Neva"
Erickson (Lindgren)
1920 - 2017
Click above to light a memorial candle. 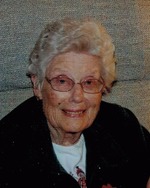 She was born on April 21, 1920 at the Swedish Hospital in Brooklyn, NY the youngest child of Sigrid (Johanson) and Gustav Lindgren. Neva skipped two grades and graduated from Girl’s High School in Brooklyn at the age of sixteen. She was a talented athlete and aspired to be a physical education teacher but had to forgo a scholarship to Mt. Holyoke College and enter the working world due the untimely death of her father. She was able to attend both Brooklyn College in its opening year and then City College of NY (CCNY) while employed.

Neva worked first at Irving Trust Company Bank in Manhattan and then as a service manager at Macy’s Department Store in Herald Square. She met John Gustaf Erickson in New York where he was serving with the U.S. Coast Guard and they were married on October 8, 1944 in Brooklyn. They celebrated 57 years of marriage before his death in 2001.

Neva and Gus moved to Detroit and then in 1948 to Calumet where they established Erickson Funeral Home and operated the business until their retirement in 1975. They were dual residents of Calumet and Stuart, Florida for many years thereafter.

In Calumet, Neva was first a member of the Carmel Lutheran Church and its women’s societies and then became a member of Faith Lutheran Church when the Swedish and Finnish Lutheran churches merged in1964. She was a faithful member of Faith’s ladies’ circle groups and sang in the choir. She was active in the Calumet Public Hospital Auxiliary, the Calumet School PTA and Band Parents Groups, the Teen Center Board, the Calumet Ladies Golf League and she took on a leadership role in the Girl Scouts. Her most important jobs however were those of wife, mother and tireless behind-the-scenes worker in the funeral home business.

Neva was preceded in death by her parents, her sister Aina (Werner) Sharp, her brother Lawrence (Jane) Lindgren, her son in law Richart Kraft, and brother in law Wally (Martha) Erickson.

A memorial service will be held on Saturday November 18, 2017 at 11:00 AM in the Faith Lutheran Church in Calumet with Pastor Tim Johnston to officiate,
Visitation will be at the church on Saturday from 10-11:00 AM.

Burial will be in the Lake View Cemetery.

In lieu of other expressions of sympathy memorials may be given to: Faith Lutheran Church 26016 Depot St./PO Box 523 Calumet, Michigan 49913.

To send flowers to the family or plant a tree in memory of Sigrid Neva Fredrika "Neva" Erickson (Lindgren), please visit our Heartfelt Sympathies Store.