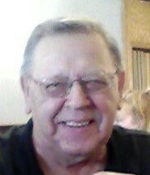 Jerry “Forker” Olsen, 73, a resident of Calumet passed away peacefully at his home with family by his side on Monday, January 23, 2017, after fighting a courageous battle with cancer.

He was born in Hancock on September 13, 1943 to Jack and Lena (Luttinen) Kinnunen.

He attended and graduated from Hancock High School.

On August 1, 1964, he married Delores “DeDe” Mauno at the Laurium Apostolic Lutheran Church, where he was also a member.

Jerry worked in several bakeries in Milwaukee and Chicago, finishing up his baking career at Thurner's Bakery in Calumet. Since then, he still loved baking and cooking and did so often.

The majority of Jerry's career was spent working hard in the copper mines. He began his mining career at Calumet & Hecla Mining Company, where he worked for several years. He then went on to work for 26 years with Copper Range Mining Company at the White Pine Mine, retiring in 1998. Following his retirement, Jerry continued to work for several years at Fort Wilkins State Park and McLain State Park.

Jerry had a passion for music. He was a very talented musician and touched the hearts of many. He loved to sing and play the guitar and was a member of several local bands throughout the years.

He was also an avid sports fan. He loved watching and playing baseball, hockey, basketball and football. He was a die-hard Green Bay Packer fan, almost never missing a game!

Jerry loved being outdoors and was always camping with friends and family. He also enjoyed spending time at the various lakes in the area. He would often relax on his swing in the backyard and always invited others to join him.

For the past several years, Jerry and DeDe enjoyed spending time at the casino, sometimes having a weekend away together at various casinos, most frequently in Watersmeet.

Jerry loved to spend time with his children, grandchildren and great-grandchildren. Along with his wife, DeDe, they were his whole world. He was always smiling and full of laughter and loved to tell jokes, often making up several of his own. He was a real comedian and enjoyed making people laugh. He was an amazing husband, dad, grandpa and great-grandpa.

Jerry is survived by his loving wife of 52 years, DeDe Olsen of Calumet

Burial will take place in the spring at the Waasa Cemetery.

Online condolences for the family may be left at www.ericksoncrowleypeterson.com.

To send flowers to the family or plant a tree in memory of Jerry Duane Olsen, please visit our Heartfelt Sympathies Store.